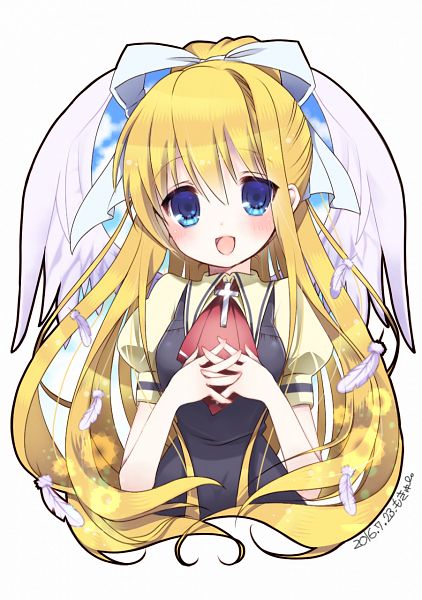 2 in Trading1 in Garage Kits

Tohno
Happy belated birthday! Hope you managed to have a decent one in spite of everything going on.
2 månader sedan

shikani
StarFruit • 3 år sedan • #24674057That would suck so much if a collector lost their interest after spending so much money, space and effort for years...I think the buyer might even have a hard time selling their collection by that time too. Selling would also be such a pain if the collector has a huge collection...Especially if nobody else wants those stuff too. ; I'm glad I try to keep my collection small all the time now. :o
I heard about Kirito's male partner, I am so excited to see the chemistry between them. But I am actually afraid that a bunch of fujoshi's might pop up for SAO when that happens. LOL I ship the canon ship - Kirito and Asuna together so much, and I'm more into Bromance/Friendship than Romance between males. I mean, I respect what others ship...And I'm in no means against BL shippings...But since SAO has been Kirito x Asuna since Season 1, it just feels uncomfortable for me to see tons of NEW SAO fans starting to ship Kirito with another person other than Asuna in Season 3. D: Season 2 created a bunch of Sinon x Kirito shippers, so that's why I'm predicting that the same might happen for Season 3. But it'd be nice to get some more fangirls in SAO! I just don't want too many hardcore BL shippers...Because I ship Kirito with Asuna. ><;
Kirito is super popular...Mad props to you for keeping up to collect for him. I remember when I tried to start a Levi(from Attack on Titan) collection, I immediately gave up when I tried bidding a mini-figure of him that ended up costing $100(won by another Japanese fan). All of his other stuff was 5x the price of the other characters in the series too...Just nope, I don't think it's worth...That's when I decided that I'll just stick to collecting for only my waifu. ^_^;;; Your Kirito collection will really become an actual Kirito shrine by then~! lol
Haha yeah, I'm pretty sure that no one else would want most of this stuff. I would probably be able to sell the figures if it came to that, but all of these goods... no way. I only bought a lot of them because they're Kirito, not because I really wanted them, so I imagine that no one else would care at all lol

Oh it will definitely happen, especially with how Alicization is structured. It's going to alienate fans of older characters while being appealing to newcomers because it's mainly Kirito and the new characters for most of it. I ship Kirito and Asuna as well, but yeah, there will be new shippers completely disregarding their relationship to ship him with Eugeo, I'm sure. And I honestly don't mind that because I ship both pairings! Besides, Eugeo also has a girl that he's in love with canonically, so if they were to have a relationship, it would just be temporary until they get back to their true loves, heh.

Levi is definitely another of those characters that people go nuts over! I personally don't see the appeal, but I know that he has tons of fangirls, and I've seen some with big collections on here, so I can believe that his merch is on the expensive side too. (Which figure was it though? I'm curious lol) Also my Kirito collection is already a shrine tbh... he's taken over five shelves at this point. By the time season 3 is in full swing and the merch floods in, I'll probably have half a wall dedicated to him. >.>
3 år sedan

shikani
StarFruit • 3 år sedan • #24618250Yeah...I am going to need to sacrifice a lot of what I have or what I want, just to save up for that 1 item of my waifu. LOL I can only justify our actions as true dedication and love towards our fave characters as we spend so much money on them. ^^; I also question my life decisions from time to time when I think about the money I spent on her, but I eventually shrug it off as a small percentage of me does think she's worth it...><; I really wonder how much you're going to end up spending on Kirito altogether in years to come because he definitely has more stuff coming out in the future. :o
Ah! I actually think so too, that Kirito has way more fanboys than fangirls! Seriously, 95% of the people at the Ordinal Scale theater were fanboys! I'm pretty sure they can't be all just here to only see the plot or for the female characters...( ͡° ͜ʖ ͡°) I found most good comments about Kirito are from males too(though arguably the target audience of SAO is directed to males anyways(with the slight harem/fan-service). And yeah, of course there's the ones who think Kirito is a bad character are there too...But in the end, there are tons of Kirito fanboys in the English-speaking side of the fandom for sure. I think Japan may have a fair share of both gender's fans of Kirito, because yeah, I know for sure that Kirito has many fangirls in Japan too. But I also haven't really found girls who like Kirito enough to fangirl on him around here(English-speaking side) as well, so I think exactly how you're thinking. It's highly possible that Kirito actually has more fanboys altogether than fangirls, it's no doubt about it in my opinion. Funny enough, like a year or two ago, I've actually read a comment from a guy who was pissed off that Kirito was like #1 for one of the Japan's best male anime character poll. And he said something like: "I bet it's all you girls who like(voted for) Kirito, he's the worst character in SAO." My immediate reaction and thought was like: "Nope...I actually think it's mostly you boys who voted for Kirito." LOL Because at the back of my mind, I didn't know any other girl who really fangirled on Kirito as well!
It is worth it, as long as we don't ever lose interest in our husbando/waifu. ;) I've been into SAO for three years now, which is the longest I've ever been obsessed with any one series, and I haven't lost any passion for it at all... but I can't even imagine the immense buyer's remorse I would feel if I ever did move on to something else and no longer care about it. Good lord, money aside, what would I even do with all this junk? lol

Yep, guys are definitely SAO's target audience, so I feel like there are a whole lot less girls in the fandom in general. Probably not enough hot guys to fangirl over and ship, haha. I have a feeling that might change when Alicization gets animated though, because Kirito's partner for the entire next season is going to be a guy, and they end up having a really close relationship. I'll honestly be surprised if fangirls don't come flooding in tbh.

As for how much money I'll end up spending on Kirito... I don't even want to think about that. Look at the immense amount of merchandise that has come from Ordinal Scale, a two hour movie! Alicization is going to be even worse, and then Kawahara is planning one more arc after that, and if Progressive ever gets animated... There's no escape for me, I'll be buying random Kirito junk for years to come.
3 år sedan

shikani
StarFruit • 3 år sedan • #24580717Oh yes! There's definitely downsides and upsides for both of us, even though our fave characters are pretty opposite. Though I still kinda' wish that my waifu could get more official goods made, so I could start an ita-bag or something...But nope, she's too out-dated and underrated. ;_; The rarity of her items popping up and the outrageous prices when they do pop up, helps me limit to buy her stuff...But I really do want to collect her stuff, so I'm not sure whether this is a good thing or a bad thing. I am actually going to save up for that 3k item. ><;
I'm not surprised with Kirito's popularity...When I watched Ordinal Scale at my local theater. Literally, I heard a guy screaming: "Kirito-senpai!" before the movie even started. I think he's surprisingly really popular with the fanboys too, not just fangirls. xD Pretty sure many love him more than all the waifus, but wouldn't dare to admit it! LOL And I've also seen the Japan fans voting for Kirito as best anime character of all-time many times. Kirito always manages to get a high rank on the polls! Japan really loves Kirito indeed. I guess you're going to have to fight against a lot of Kirito fans to get some of his goods...x'D
Well, I hope that item shows up for cheaper so that you don't have to pay the 3k! I'm not sure if I could even justify spending that much for a Kirito item, it was already hard enough to justify the Dollfie... In fact, I've probably spent at least 5k on him in total, and when I think about that sometimes I wonder what I'm doing with my life lol

I actually think that he has way more fanboys than fangirls. Like, I know he has fangirls in Japan, but in the English-speaking side of the fandom I haven't encountered many other than myself... It seems like people over here either think he's super badass and cool (fanboys) or that he's the Worst Character of All Time Ever. I don't know if I've just been looking in all the wrong places or what, but I honestly haven't seen many who actually care about him enough to fangirl him...
3 år sedan
Visa fler kommentarer