Scones1 år sedan
Hello everybody, and welcome to a new article.

I was taking a look at Aniplex's Kimetsu no Yaiba line, and took one last look at Inosuke (ITEM #994532), all to decide once over again "this is not getting better or growing on me with time." Take off his boar mask and he's hideous underneath. Phantom of the Opera in Feudal Japan, produced by Aniplex.

However! The issue is not just that he is out of character, but it's also the mismatch between the action pose and blasé face. It is not a stoic or focused expression, it's simply dull and stiff, even more so with the dynamic battle stance weeding it out. He looks like a tired customer service representative who's just been disrespected over his colored hair by a middle aged lady.

But, what if the face had been more well-executed? Had it been more serious, but with better direction of the eyes, visible eyebrows, and a more passionate/confident frown, would that have been workable? Had he still ended up without the usual fiery bite in his eyes and the self-satisfied smile, but been better looking, is the out of character-ness an advantage?

And so, how do you feel about out of character figures?

Do you believe them to be showcasing unique sides of characters?
Or do you prefer the expected characterizations, such as the bubbly character having a wide grin and blush instead of a subtle smile? Do you prefer that over experimentation and different interpretations?

If your grail was to be released tomorrow, would you find it to be more worth-it or completely ruined if the expression was unusual for the subject? Is it an issue with a suspension of disbelief and staying source-accurate?

My answer is beneath the cut:
View spoilerHide spoilerIt depends for me. The degree to which a character is, say, angry and harsh, and their circumstances/story sway things. The tsundere high school girl can more easily look like a sweetie than a dark seinen protagonist. That's a given, so let me get more specific; emotional weight has to be behind the smile of someone like Levi, Todoroki, or Sasuke. (Examples, I know nothing about the latter two, only about Levi and am not much of a fan.) Character design plays a role too, from the get go. Guts from Berserk isn't smiling in his new figma for how extreme his show is, and his design carries the same weight, that which doesn't allow for even a slight deviation.

As long as it is realistic for a morose or silent character to smile at some point in time in their series, and the circumstances for that are made explicit in the figure, such as a base or accessory lending a good vibe/context, then it can be done. Overall, I like to see the occasional out of character figure, because they wouldn't be such gems if they were everywhere. The standard for me on a regular basis though is that the essence and personality, the real defining points of why we like the characters we do, need to be maintained.

The one determining factor to rule them all though is the plot-driven vs character-driven nature of an anime, and its tone. Cliche high-school setting anime have a lot of leeway in tone throughout their runs, and their figures will follow in suit. As for the first point, it ties into tone and figures produced afterwards in how a plot-driven series can brush past some characters' emotions a bit more often that a character-driven show can.

Usually there's a good reason for a figure sticking to its guns; who its character is when boiled down. Overall, it has to be realistic if it's taking on a new angle, be the show a lax, slice-of-life one or a treacherous, bloody one, with equally emotionless characters for instance.


Thanks for reading everyone, and have a good one.
3,232 visningar • 5 favoriter • 18 kommentarer

Out of character figures: yes or no?

One type of OOC figures I dislike are fanservicey ones - especially if the character is the exact opposite of that! For example, Sinon from SAO. She has quite a lot of fanservice figures but the worst I've seen is ITEM #284769. She's a badass, cool character and would never do something like this. This has been mentioned, but I don't like the bunny figures too.

However, I think if it's an OOC figure of my favourite character, I will probably still get him anyways! :P (I really can't think of an OOC pose for Joker though...unless, it's a blatant fanservice one.)
1 år sedan

heroizumi
Man....That Inosuke face is pretty oof. It's okay with the mask on, but he looks bored out of his mind without it. However, I can't stop staring at the seam line on his arm, so he's a no just for that. Maybe if he ends up losing value and ends up binning it I would be happy to grab him, but for his list price? Definitely no.

I don't think I have any figures that are really out of character, but when I do see them I just feel kinda...Confused. It hurts when the character is one I really like, but the figure just doesn't fit their personality.
1 år sedan

When Makoto is riding her bike Johanna, she usually has an angry and aggressive expression and pose. She is a total badass in battle. However, they went with a smiling expression and a fan service type pose for this figure.

Would have skipped this figure if it was just her alone but with her bike the overall figure still looks amazing as the bike is really cool and well done and the detail on her outfit and bike is great (especially the sculpt and paint of the bike).

So overall, it's still the best and only Makoto with her persona figure (the re-release with the glossy metallic paint on her bike looks superb as well) and I ended up getting her no regrets (especially with the high aftermarket value of this figure).

In conclusion, she is an exception in my collection where most if not all my other figures that I own and PO are accurate to their source material and have expressions and are in poses that suit them well.
1 år sedan⊛

ueggg98
I know that ITEM #740245 is part of a series of bunny heroines, but it literally makes no sense for Kirigiri because View spoilerHide spoilershe supossedly has horrific burn scars on her hands and lower arms. So she would never wear something like this canonically. Lol.
1 år sedan

Asher_Mir
In the case of what you mentioned about this figure's face, it's the same way I feel about this figure of V from DMC5 ITEM #836697. In the game itself, the character either has a smirk on his face, or even when looking neutral, he has an air of mystery and aloofness to him, like he's always thinking of something important, one step ahead of you. Not in a malicious way, but in an unreadable, ambiguous way.

The face on this figure however, just looks completely neutral, or dull. I don't think it fits the personality of the character, and I think when displaying him, it would take away a lot from it. I understand it must be hard to create poseable figures, since you have to take into account different moods that people want to create, but a completely neutral face usually takes away any mood, and I'll rather take a figure with a set facial expression that fits the character, and limits some moods you could create.

As for what others in the comments are focussing on (the ooc fan service figures), I was about to agree with them, but on the other hand, I know for a fact that if there were more fan service figures of my favorite male characters, I would buy them in a heartbeat haha. I guess it has more to do with saturation tho - female characters get those all the time, but to find a male figure that is purposely sexualized is very difficult.

I'd like to display a 'sexy' version of my favorite character if I could, but I would take it the same way I do with other merchandise that depicts basically an AU version of him. As long as the situation is what's ooc, rather than the reaction of the character, I think it's fine. E.g. the CAPCOM Café does a lot of collaborations, which depict characters from their games as waiters at the Café. The more stoic characters will still look stoic, but the situation they're in is still ooc (why would this guy work as a waiter when he's a demon king or something? etc).

And sometimes, this can even contribute to the character I think. A stoic character being shown as enjoying themselves in this ooc setting, it can be a cute revelation that there's another side to them that the in-character material cannot explore.

I hope this wasn't too off-topic, but these were my thoughts on the matter!
1 år sedan⊛ 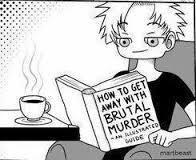 LavenderRum Howdy!
While I definitely admire the craftmanship on some ooc figures, I would never buy one. Especially if they're ooc fan service. I feel there's a way to do fan service while still being true to the character and when I don't see that, that just tells me the crew went "hehehe boobies". Make them true to chatacter damn it! Also...

"He looks like a tired customer service representative who's just been disrespected over his colored hair by a middle aged lady."

The mere thought of Inosuke in customer service is too powerful. The day he snaps would be inevitable.
1 år sedan

Act
It's especially annoying when characters only get OOC figures -- Rin Tohsaka basically only has fanservice figures, and even the two more 'serious' scales are upskirty (and the older one has such awful boobsocks). I would kill for a figure that takes her seriously as a character, but it's just not going to happen. Ditto for what someone said below about the proliferation of maids and bunnies.

Rimurushion Slime Demon Lord
As long as it’s my favourite character I will buy it! Although I don’t like sexualised figures and the other thing is when they put two characters together in one figure it’s really annoying because usually I love one and not the other so you’re forced to buy the other as a package deal.
1 år sedan⊛

Figmaniac93
Unwritten rule for my collection is all figmas/scales must be portrayed in character and wearing outfits derived from source material, with very few exceptions.
1 år sedan
Visa fler kommentarer

Welcome to my articles. Posting loots, reviews, and more.