nial094 månader sedan
Heeey, it's been a while again. Hasn't 2020 been an eventful one so far, I hope everyone is safe in this rough patch. I had many figures planned to be spread out throughout this year since I'm focusing to review newer figures, but the cursed delays strike again. So many figures of mine got pushed to June, which is not ideal since that's going to be a bombshell on my bank account ノ﹏ヽ). I'm also really surprised that Eresh got sent out in good timing due to all the things happening, so big props to BigInJapan! Anyhow onto the review.

In this review, we have the beautiful Goddess and ruler of the Underworld, Ereshkigal, from Fate/Grand Order. You may have seen her in all her glory from the new FGO Babylonia anime. Like Ishtar, she took the form and appearance of Rin Tosaka. Who doesn't love rin faces right?? (´∀｀ ).

Man I'm still so sad she didn't come to my Chaldea when I rolled for her, hopefully, she comes home soon! ノ﹏ヽ)

This figure is once again manufactured by Aniplex as an exclusive. If you brought Ishtar you HAVE to get Ereshkigal to go with her! Her box is quite fitting, it has accents and colors which show on her outfits, Overall well compromised. What they did do differently this time though, instead of having a window on one of the sides of the box, they did a sorta full art of the figure with the underworld background, you have to appreciate when they do these!

Ereshkigal is standing at 10inch (260mm) scaled at 1/7. I don't think that measurement includes her spear though, id says with the spear it's about 13inch. Ereshkigal comes in 4 parts. Herself, Base, base peg support, and her spear.

Her base is again nothing special or spectacular, as I always say, I'm not a fan of the bases Aniplex makes for their fate figures, especially with the price you pay for figures like this, It's a little like something you would expect from a prize figure.

Ereshkigal is dressed in her second ascension outfit this time, I'm really glad they chose this one because it's by far the most interesting out of the 3 outfits she has. Especially with her leg armor... One leg armor, and super cool skeleton accents. It makes her look like she's a Goddess of the Underworld! They did a great job of capturing her image from the art.

They did a wonderful job on her face sculpt, it captures her confident face she always likes to put on. Although we all know she is shy and caring hehe

Her hair is also nicely sculpted and painted. A lot of the time hair can look blocky so kudos to the sculptor who did this one as it looks wonderful!

As you can see in the upper part of her outfit, they did a great job at the detailing, sculpting, and paint! I'm really happy with the outcome. There are a few errors like some marks on the black areas of the outfit and some paint transfer but it's not that noticeable so I'm okay with it! I'm really loving the skulls and the gold metallic highlights. Looks very clean.

Even Goddesses of the Underworld sometimes have bad nail days it seems. (´∀`)

Likewise with her top half, below is really well done. I'm in love with her leg armor! The detailing and sculpt is really cool and well done, its for sure my favorite part of the figure. I really like the red marking on her thigh too, some details you only see once you get the figure. (´∀`)

Another example of something you only see once you get the figure is the crest on the back of her cape, I never knew that existed! I'm not sure if it means something or if it's just a design, do let me know if you know of it. The paint on her cape is lovely, The deep purple and the gold reflecting from it just looks wonderful. A beautiful color combination. I would recommend you to use the support peg that goes under the cape due to it being so heavy.

Here we see her spear, the blazing soul of Meslamtaea. Typically I'm not the biggest fan of these big translucent effect parts of figures, but ill let this one pass since its actually part of the artwork, and it looks much better than the average you get on some figures. As for some, they look blocky and kinda cheap looking, but this one has a nice look with the shape it's taken. The color of it looks great too, instead of being one flat yellow color, there are white accents mixed within it. It would be cool though if we got an option to use her First ascension spear!

Also, the spear seems to be cut in half but connected by other parts of the electric effect, I'm not 100% sure if its meant to be like that since the instructions didn't say anything about it, I was really scared because I thought it was broken at first but I'm pretty sure it's so you can take it out her hand if needed. If you own this figure It would be great if you could confirm it!

Overall I'm really happy with the outcome of this figure, she's a real showpiece and looks great alongside Ishtar when displayed! I look forward to seeing more with Aniplex since they once again came out on top with a really nice quality figure! You can find her for around 18,000 JPY, let's hope aftermarket won't cause too much damage! So do pick her up if you are a lover of rin faces!!
(≧∇≦ )

ddarko
PlatoG • 4 månader sedan • #77857842If you play FGO, please check their official portrait of this character.

I did not mean it as a slight. It is just that anatomically, it looks like she broke her foot. I presume the portrait you speak of is 2D? The thing is, what works in 2D can look odd in a 3D figure because now you can see from the side and such.
4 månader sedan

PlatoG
ddarko • 4 månader sedan • #77857663Doesn’t the right foot bother you? It is such a gorgeous statue, but that right foot just feels wrong.

If you play FGO, please check their official portrait of this character.
4 månader sedan

PlatoG
i agree Aniplex standard is not on par with Alter, GSC or Max factory but it is definitely better than most figure companies.

honestly, people have to mind that those pictures are really taken close up (the finger is shown in a 15cm picture while the figures itself just 22 -24 cm.) and stop comparing them with your prize figures.

Or else , you just take a picture of your prize figure's part and enlarge to this size and tell me they are the same.lol
4 månader sedan⊛

ddarko
Doesn’t the right foot bother you? It is such a gorgeous statue, but that right foot just feels wrong.
4 månader sedan

Elise_Grimwald Genius Puppeteer
Thanks for the review!

Honestly, after reading your review, I'm glad I skipped her for money reasons. I have her prize figure, and sadly, she almost looks better than this one. This is a $200+ scale figure, but looks almost like my prize figure. That's not acceptable.
She shouldn't have those paint flaws on her nails at this price point. It shows Aniplex+ doesn't care about QC, and will honestly make me avoid them going forward if I can help it. Unless they happen to be the only ones making 3rd ascension Eresh, then I will have to buy it. :(
Oddly, their Jalter was good, though, so I wonder why Eresh looks bad?
Luckily, there are a few other companies making one, and hopefully those don't get canceled so we can get an Eresh scale that is decent quality.
4 månader sedan

Lucifiery
CaptainZ • 4 månader sedan • #77837715Yeah, muted colors, weak sculpt, and poor QC, I'd put in into that category too. I'm one of those sick fucks who likes the other version of her better but sucks for fans of hers got this.

Yep, I believe if Aniplex continues to announce figures there will be some hype but then its like "oh its Aniplex" and the hype goes downhill over time. I had that thought process when Jalter and Hokusai was announced at the WF2020. Buy Aniplex figures if you want to, just keep in mind that the QC isn't in par with the price. What's funny is that this figure is slightly better than Musashi by Phat imo.
4 månader sedan

toxicfleurs
Thanks for the wonderful review and shots as well! I'm finally sure that I'll be skipping Aniplex figures from now on. I always find their figures off or meh. Eresh looks great far away, but upclose there are so many flaws especially with the paint, still its going to be an eye catching fig in your collection. I can't imagine how many flaws Shi Huang Di's figure will have ... that figure is over the top.
4 månader sedan 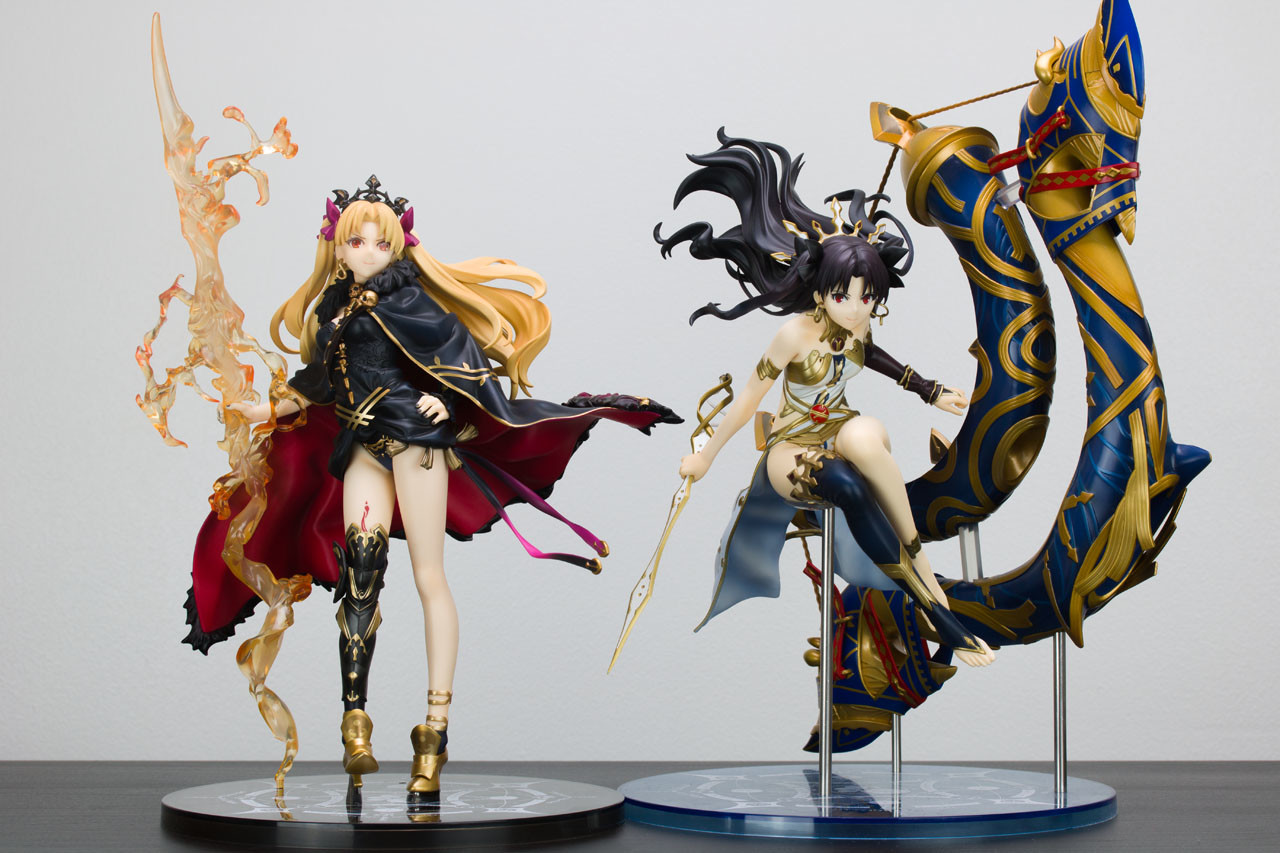 Thanks a lot! I think she looks very good, especially next to Ishtar.
4 månader sedan

nial09
Kendappa • 4 månader sedan • #77839104Thanks for sharing this really nice review. Do you think you can put up some pictures of her next to Ishtar? :3
Hey!, thanks for reading, there you go!

nial09
Sorry guys if you're dissatisfied with my thoughts and pictures of Ereshkigal. Thank you for giving your thoughts and opinions about her. I'll try to be more critical of my upcoming reviews.

One more thing I would like to address after owning the figure for a day, It seems that her spear is starting to bend from where they cut(?) it in the middle. It's a real shame her spear has this fault, I still can't confirm if it's meant to actually be in 2 parts. Below is what I'm addressing here:
View spoilerHide spoiler 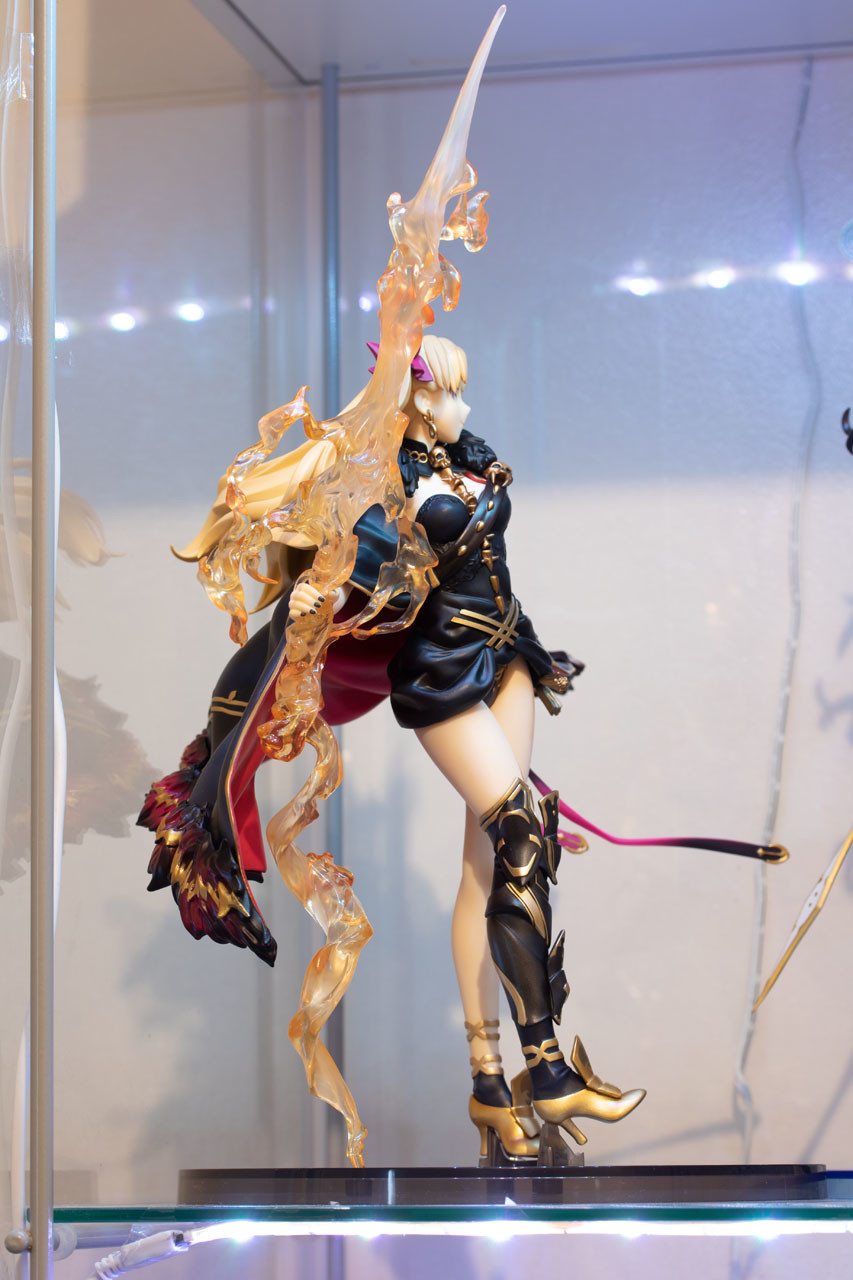