Magusfigures3 månader sedan
Hi guys! Since the world is a lot right now and it looks like it's going to be a long while before my next review I wanted to make a post about something fun!

I made my first itabag this year and was hoping to bring it to Sakuracon, but since the con was cancelled, I won't have a chance to wear it until next year ;-;. I'd imagine a bunch of people are in the same boat, so why don't we all show off our itabags here on MFC?

Here's mine! The character is Sandalphon from Granblue Fantasy.

Sandalphon is a character who means a lot to me, and while I usually don't go ham on buying merch for a single character, I ended up with a LOT of Sandy items... It's mostly fan merch, because Sandalphon charms are REALLY hard to get outside of Japan--Cygames does limited/exclusive releases a lot of the time, and given Sandalphon's popularity, his items usually skyrocket in price in the aftermarket >_<. But a lot of fan artists I like have put out merch for him, so I'm happy to both support them AND show off my love for my boy!

Someday I hope to get a few more items to even out the blank spaces, but for now I'm satisfied with it.

If you've made an itabag, I wanna see it! Throw a picture in the comments, and show off your love and dedication for everyone to see!

If you haven't made one yet, which character would you want to make one for?
1,466 visningar • 7 favoriter • 34 kommentarer

damedanbo
Pardon the personal insta link, I realized I don't actually have a photo of my bag on here yet. Bag needs an update (I have the matching Mukuro can badge now, and iirc I selected the fabric I wanted for the insert, just haven't put it together yet) but I'm also still missing one crucial piece... If I ever get ahold of this rubber strap to put up in the top middle, it'll be done! ITEM #782806


I've also been collecting Jojo fanart merch again, so at some point I'll probably have a Diavolo + Doppio or possibly a Kiravolo bag at last... 'q'
3 månader sedan

diaeons
I've been wanting to make an itabag for a while now, when I was in Animate they'd just released a whole new section in the bottom of the Akiba store dedicated to different sizes and types, but there was such a huge choice I couldn't settle on one >w<

I'm also forever undecided on who to make it for! Maybe my best boy Inamaru Toma or Natsume Minami from I7/ZOOL... or maybe Gentaro, Ichiro or Kuko from HypMic ... one of my Fate faves like Caster!Gilgamesh or Semiramis? Decisions decisions X3 but yours is super cute so it spurs me to try and think about it some more!
3 månader sedan

PrinceMonochrome
AshenDemon • 3 månader sedan • #77679292That's such a cute base bag for Kira!!! I love that stray cat enamel pin

Thank you. The moment I saw this bag, I knew it had to be for Kira. I also love the stray cat pin. I hardly see any merch for stray cat or killer queen so snagging one of these was a must.
3 månader sedan

AshenDemon
PrinceMonochrome • 3 månader sedan • #77675354I just remembered right now before bed to take a picture of my Kira itabag. I still need to find more buttons and other merch of him to put in here.View spoilerHide spoiler 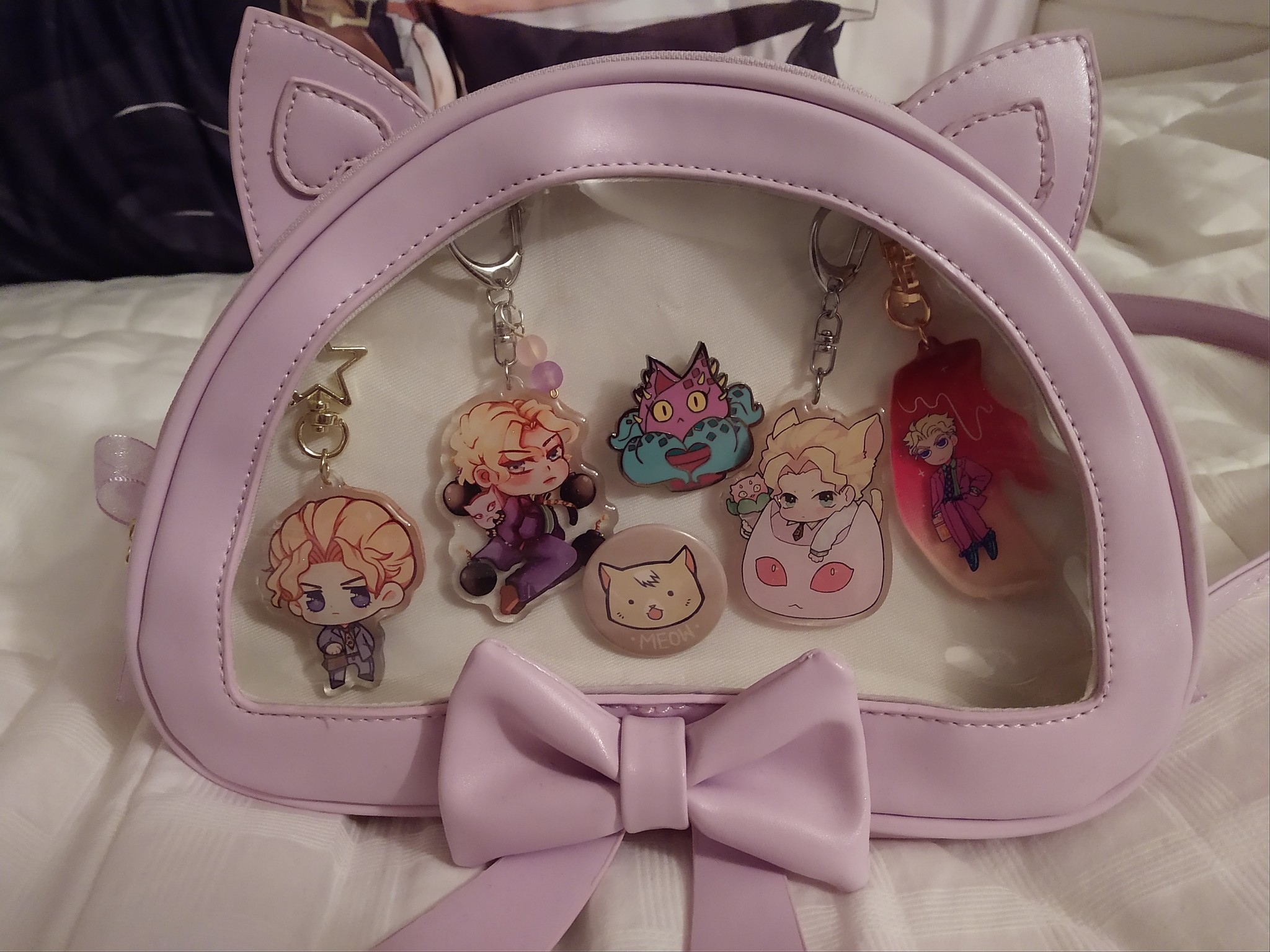 That's such a cute base bag for Kira!!! I love that stray cat enamel pin
3 månader sedan

AshenDemon
Ohh I loved going through here and seeing everyones bags!!! They really are such a fun way to collect merch AND show it off lol 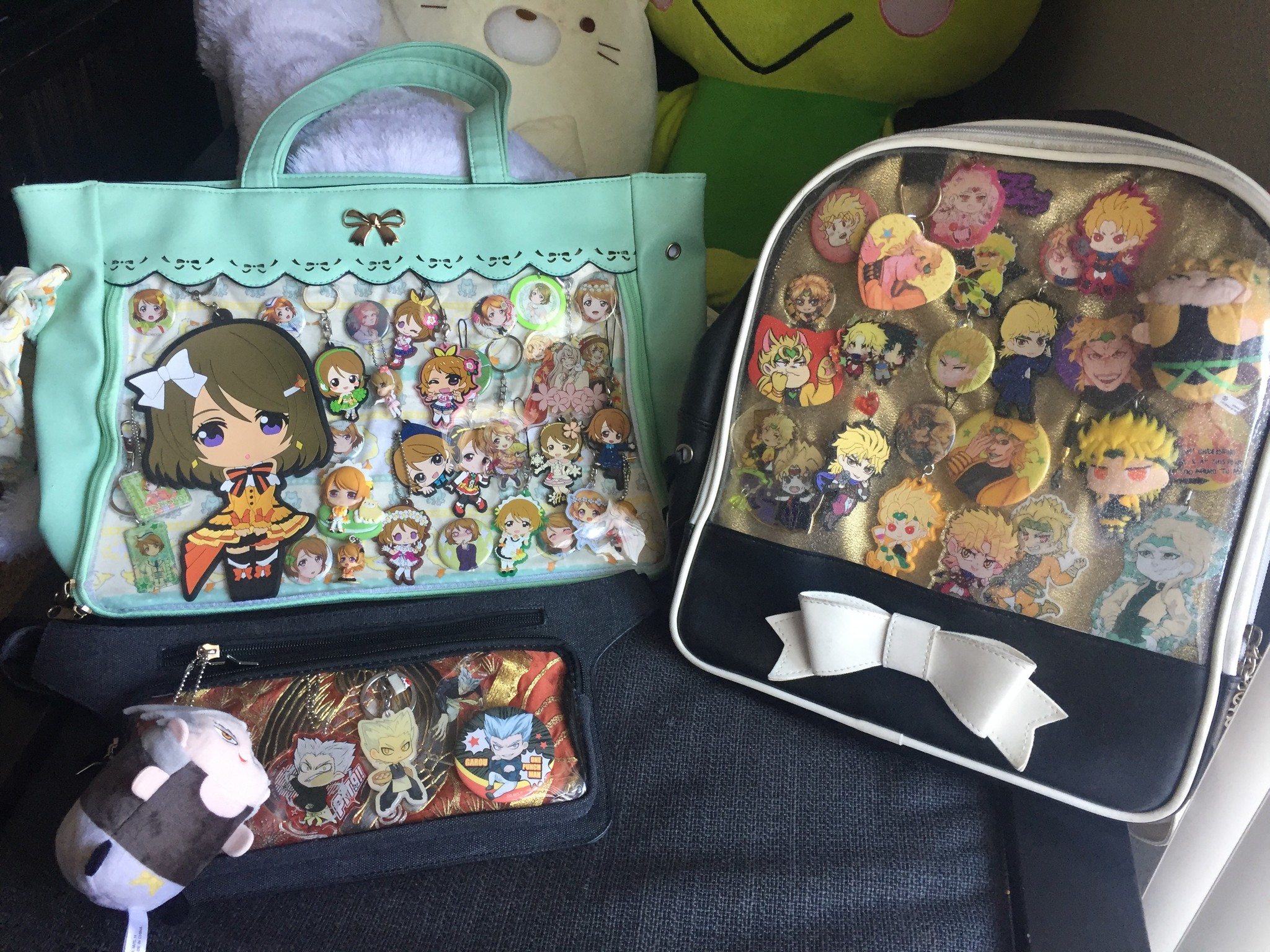 bomhat because I'm batman
002 • 3 månader sedan • #77675467:) your welcome! I love it!!
I also have the other 3 from the set on pre order. Do you happen to know when those will be coming? The orders were shipped out later than expected due to printing problems and there's a general delay in post right now. Please contact me in two weeks if they haven't arrived. Cheers
3 månader sedan

I also have the other 3 from the set on pre order. Do you happen to know when those will be coming?
3 månader sedan

bomhat because I'm batman
002 • 3 månader sedan • #77671175I am still searching for an Ita bag Been looking for a pink one but it's been hard especially seeing the ones on Ebay it's either hit or miss with quality.. but I have a very Large Zero Two Pin Collection ^_^

omg hey its my pin. thanks lol
3 månader sedan

PrinceMonochrome
I just remembered right now before bed to take a picture of my Kira itabag. I still need to find more buttons and other merch of him to put in here.

ojakue mika itsuki
i always wanted to make an ita bag but it wasn't until i got into ensemble stars. 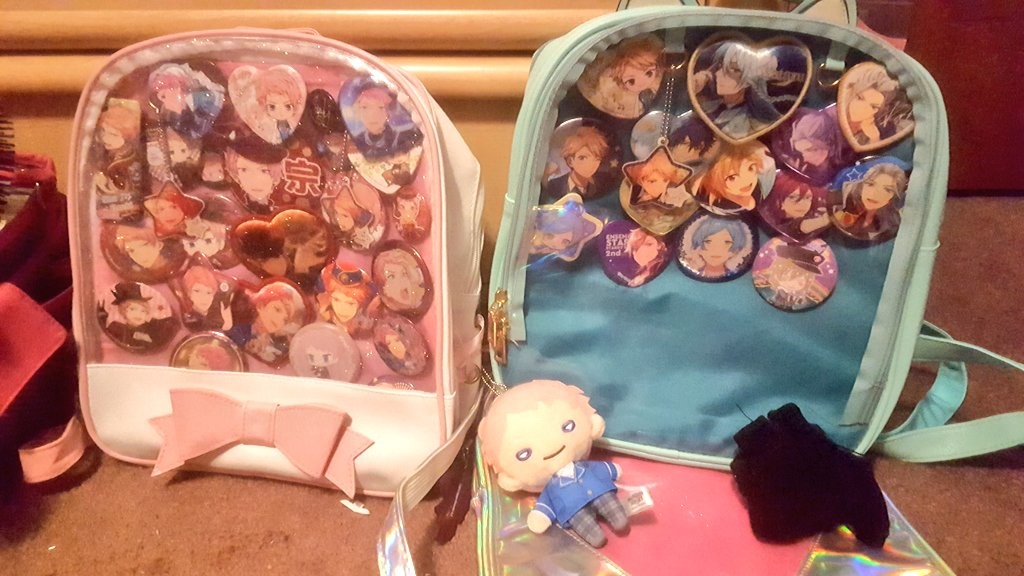 shu's my absolute favorite from enstars but i love more characters. that's why i got another one!!! :) these were for acen for my mika cosplay, but since that got cancelled, these bags have just been sitting here.
3 månader sedan
Visa fler kommentarer

I'm Ren! Mostly I post figure reviews, but I'll also use this as a space to share figure-related life happenings/creative projects, and the occasional loot!